BOC Sciences provides a diversity of metabolites fermented and separated from plants, microorganisms, fungi and other organisms. We have been committed to providing customers with high-quality cyclosporin and its analogues at the best price.

Structure and Synthesis of Cyclosporin

Cyclosporin is a non-ribosomal cyclic polypeptide composed of 11 normal and abnormal amino acids. It was first isolated and identified in 1971, and more than 30 structural analogues have been found successively.

Cyclosporin A (CsA) is the first Cyclosporin analogue approved by FDA as an anti-immune rejection drug, hydrophilic immunosuppressive active sites can be formed on the residues of amino acids 1, 2, 3 and 11. CsA is produced by the strain of Polypocladiurn inflatum. The molecule contains several unusual amino acids such as L-2-aminobutyric acid and D-alanine. In addition, the CsA molecule contains seven N-methylated peptide bonds. Biosynthesis of CsA is catalyzed by a specific polypeptide polyenzyme, Cyclosporin synthase. This enzyme catalyzes CsA synthesis from unmethylated precursor amino acids through a sulfur template mechanism. When these substrate amino acids bind to the enzyme in the form of thioesters, they are catalyzed by methyltransferases in Cyclosporin synthase for N-methylation reactions.

The mechanism of Cyclosporin synthesis have been reported. It was proved that the SimG pathway in gene cluster was responsible for the synthesis of abnormal amino acid 2-butyl-4-methyl-threonine Bmt, and the racemase SimB was responsible for the conversion of L-alanine to D-alanine, and then the sequence addition and cycination of 11 substrates were mediated by SimA to produce CsA. 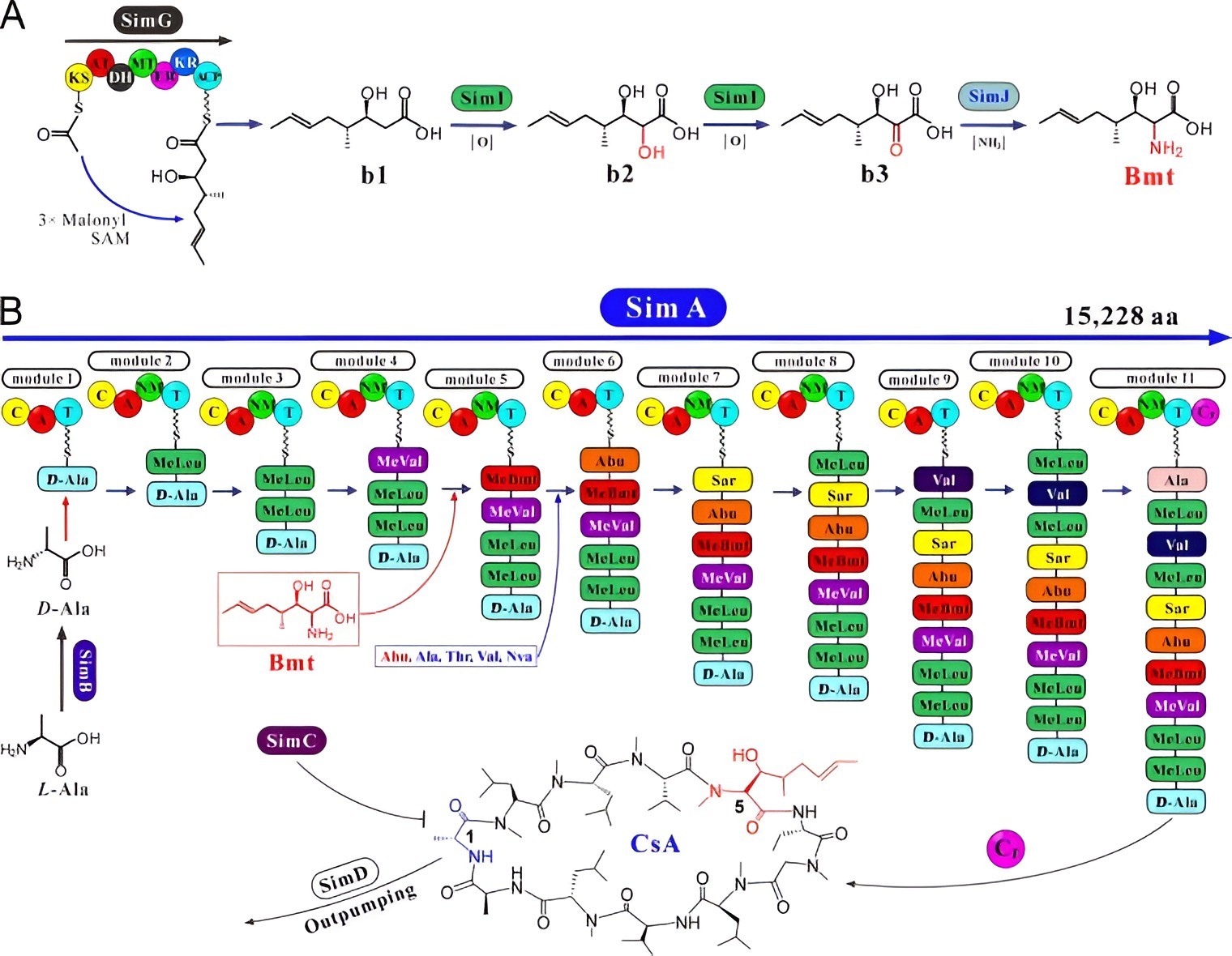 Cyclosporin is a potent immunomodulatory agent with an increasing number of clinical applications. Cyclosporin is different from cytotoxic drugs in that it only inhibits T cell-mediated cellular immunity without significantly affecting the body's general defense ability. Cyclosporin can selectively act on the initial stage of T lymphocyte activation and inhibit the interleukin 2 produced after the activation of helper T cells, while it had no effect on inhibitory T cells. Cyclosporin also inhibits the production of interferon by lymphocytes.