* Please be kindly noted products are not for therapeutic use. We do not sell to patients.

It is produced by the strain of Str. tanashiensis IM 8442T. It's a quinone antibiotic. It has the activity of anti-gram-positive bacteria and some gram-negative bacteria, but the effect of anti-gram-negative bacteria is weak and has no effect on fungi. Lactoquinomycin A has stronger antibacterial activity than Lactoquinomycin B. It inhibits a variety of cell lines including lymphoma L5178Y progenitor, adriamycin resistant, bleomycin-resistant, human leukemia K562, mouse leukemia L-1210 and mouse leukemia P 388 with ID50 (μg/mL) of 0.02, 0.006, 0.008, 0.033, 0.013 and 0.03, respectively. 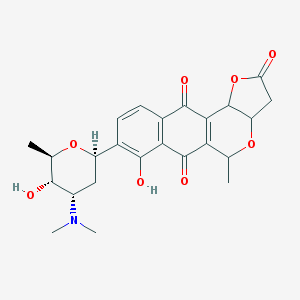 1.Practical procedures for genetic manipulation systems for medermycin-producing Streptomyces sp. AM-7161.
Huiqun D1, Xiaofeng C, Jianxin P, Huazhu H, Koji I, Aiying L. J Basic Microbiol. 2010 Jun;50(3):299-301. doi: 10.1002/jobm.200900240.
Streptomyces sp. AM-7161 is a producer of an aromatic polyketide medermycin with strong antibacterial and antitumor activity. It has been inefficient to perform genetic manipulations in this strain, which heavily hinders the genetic analysis of some interesting problems concerning tailoring modifications in medermycin biosynthesis. Here, condition optimizations of sporulation and mycelium growth of this strain as well as protoplast preparation and regeneration were conducted systematically. Based on these results, protoplast transformation system was established, and two types of foreign plasmids (integrative and auto-replicating) were efficiently introduced into this strain. Additionally, a conjugation system to mediate plasmid transfer between Escherichia coli and Streptomyces sp. AM-7161 was also optimized and established. These results provide the practical procedures to perform more convenient genetic analysis of medermycin biosynthesis in this strain.
2.Functional Characterization of a Ketoreductase-Encoding Gene med-ORF12 Involved in the Formation of a Stereospecific Pyran Ring during the Biosynthesis of an Antitumor Antibiotic Medermycin.
He Q1, Li L2, Yang T1, Li R3, Li A1. PLoS One. 2015 Jul 10;10(7):e0132431. doi: 10.1371/journal.pone.0132431. eCollection 2015.
Medermycin, a polyketide antibiotic, possesses strong bioactivity against a variety of tumors through a novel mechanism and is structurally featured with a pyran ring containing two chiral centers (3S and 15R). By far the biosynthetic origin of such enantiomerical conformations still remains obscure. In the present study, we reported the functional characterization of a proposed ketoreductase Med-ORF12 encoded by medermycin biosynthetic cluster and revealed its involvement in the stereochemical control at C3 center of medermycin. Firstly, bioinformatics analysis of Med-ORF12 suggested that it belongs to a group of stereospecific ketoreductases. Next, a Med-ORF12-deficient mutant was obtained and LC/MS measurements demonstrated that medermycin production was completely abolished in this mutant. Meanwhile, it was found that two shunt products were accumulated at the absence of Med-ORF12. Finally, the reintroduction of Med-ORF12 into this mutant could restore the production of medermycin.
3.Studies towards the synthesis of medermycin via Dötz benzannulation.
Qu C1, Tang E, Loeppky R, Deng Z, Pulley SR, Hong X. Chirality. 2015 Jan;27(1):18-22. doi: 10.1002/chir.22383. Epub 2014 Oct 17.
The C-arylglycosides are available in enantiomerically pure form via the Dötz benzannulation reaction between Fischer alkenyl chromium carbene complexes and alkynes; it also could be converted to a precursor of medermycin by O-carbamate directed ipso bromination and nitrile substitution in good overall yields.
4.[Expression detection of med-ORF12 encoding a stereochemical ketoreductase possibly involved in medermycin biosynthesis].
Sun R1, Liu M, Gong C, Wang W, Zeng A, Li A. Wei Sheng Wu Xue Bao. 2012 Jan;52(1):60-8.
Medermycin, an aromatic polyketide antibiotic produced by streptomyces, possesses a stereochemical-pyran-ring lactone critical for its strong anticancer activity. The med-ORF12 located in the biosynthetic gene cluster of medermycin encodes a stereochemical ketoreductase. Based on many indirect data, we proposed it to be involved in the enantioselective reduction at C-3 in the formation of the pyran ring of medermycin. The direct genetic evidence about the function of med-ORF12 in the medermycin-producing strain has yet to be obtained. Enzymatic features, expression and regulation pattern of Med-ORF12 in the medermycin-producer still remain obscure.