As a leading CDMO in fermentation, BOC Sciences provides one-stop services to manufacture microbial fermented products such as terpenoids. Our terpenoids platform is dedicated to meet the needs of customers in various industries. Our scientists support the development of new strains or fermentation processes to biosynthesize the desired natural products and to scale up production.

Terpenoids otherwise known as isoprenoids are a large and diverse class of naturally occurring compounds derived from five carbon isoprene units. Natural products are the compounds which isolate from different natural sources such as microbes, plants, animals, insects, etc. Terpenoids are the largest class of plant secondary metabolites, which are formed by the enzymatic reaction of primary metabolites (e.g. amino acids, sugars, vitamins). They perform several important functions in plants and humans and have substantial pharmacological bioactivity. Terpenoids are classified into monoterpenoids, sesquiterpenoids, diterpenoids, sesterpenoids, triterpenoids and tetraterpenoids according to their carbon units.

Carotenoids, also called tetraterpenoids, are a class of naturally occurring pigments synthesized by plants, algae, and photosynthetic bacteria, which are generated from fats and other basic organic metabolic building blocks. Carotenoids are beneficial antioxidants that can enhance immune system of humans. α-Carotene, β-carotene, β-cryptoxanthin, lutein, zeaxanthin, and lycopene are the most common dietary carotenoids. Among them, carotenoids containing unsubstituted β-ionone rings (e.g., α-carotene, β-carotene) have vitamin A activity, and they can be converted to retinol.

The skeleton of terpenoids is composed of C5 isoprene units whose precursors are isopentenyl diphosphate (IPP) and dimethylallyl diphosphate (DMAPP). Terpenoids are synthesized in eukaryotes, archaea and a few bacteria via the either mevalonate (MVA) pathway, starting from the condensation of two glycolytic intermediates, pyruvate and glyceraldehyde-3-phosphate, and in prokaryotes and plant via the 2-C-methyl-D-erythritol 4-phosphate (MEP) pathway, starting from the condensation of acetyl CoAs.

Although the main source of commercially available terpenoids is extraction from plants, however, plant extraction suffers from its low productivity and therefore the use of microbial large-scale fermentation for terpenoid production is a viable approach. Terpenoids can be biosynthesized by introducing relevant genes into the host strain, a process that involves the transcriptome, proteome, and metabolome. Two attractive microbial hosts based on the MEP and MVA pathways, E. coli and Saccharomyces cerevisiae, respectively, have been used to produce a variety of terpenoids. 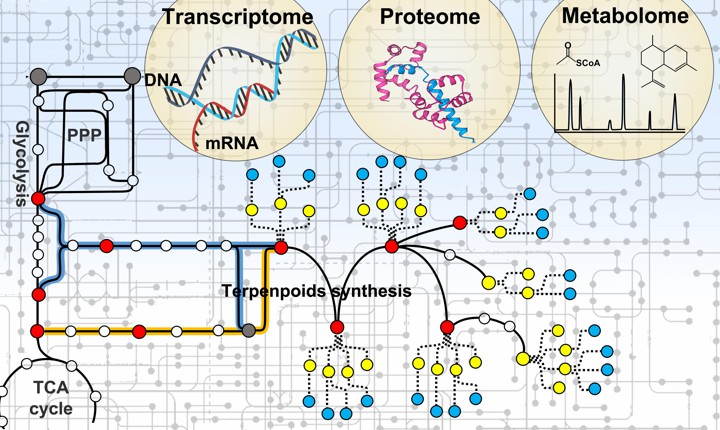 Microorganisms grow rapidly and are not heavily dependent on land and water resources. Therefore, they have great potential for sustainable large-scale production of terpenoids. Microbial hosts in terpenoid fermentation production have the following advantages:

Most terpenoids are biologically active and are widely used in the treatment of many diseases. Many terpenoids inhibit different human cancer cells, e.g. paclitaxel and its derivatives are used as anti-cancer drugs. Many flavors and fragrances are composed of terpenes because of their great aroma. Terpenoids and their derivatives are used as antimalarial agents, such as artemisinin and related compounds. In addition, they also have anti-inflammatory, antibacterial, antiviral, hypoglycemic, anti-cardiovascular disease, promote transdermal absorption, insecticidal, immunomodulatory, antioxidant, anti-aging and neuroprotective effects. Meanwhile, terpenoids play diversified roles in food, pharmaceuticals, cosmetics, hormones, vitamins, and other fields.